Geophysics is a branch of physics that deals with the study of the Earth. It is mainly concerned with the shape, structure and composition of the Earth, but geophysicists also study gravitational force, magnetic fields, earthquakes, magma, and more. Geophysics was only recognized as a separate discipline in the 19th century, but its origins date back to ancient times. The first magnetic compasses were made from 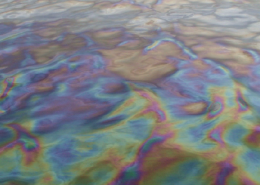 What are the environmental hazards that may occur when oil spills over a large surface area of the sea?